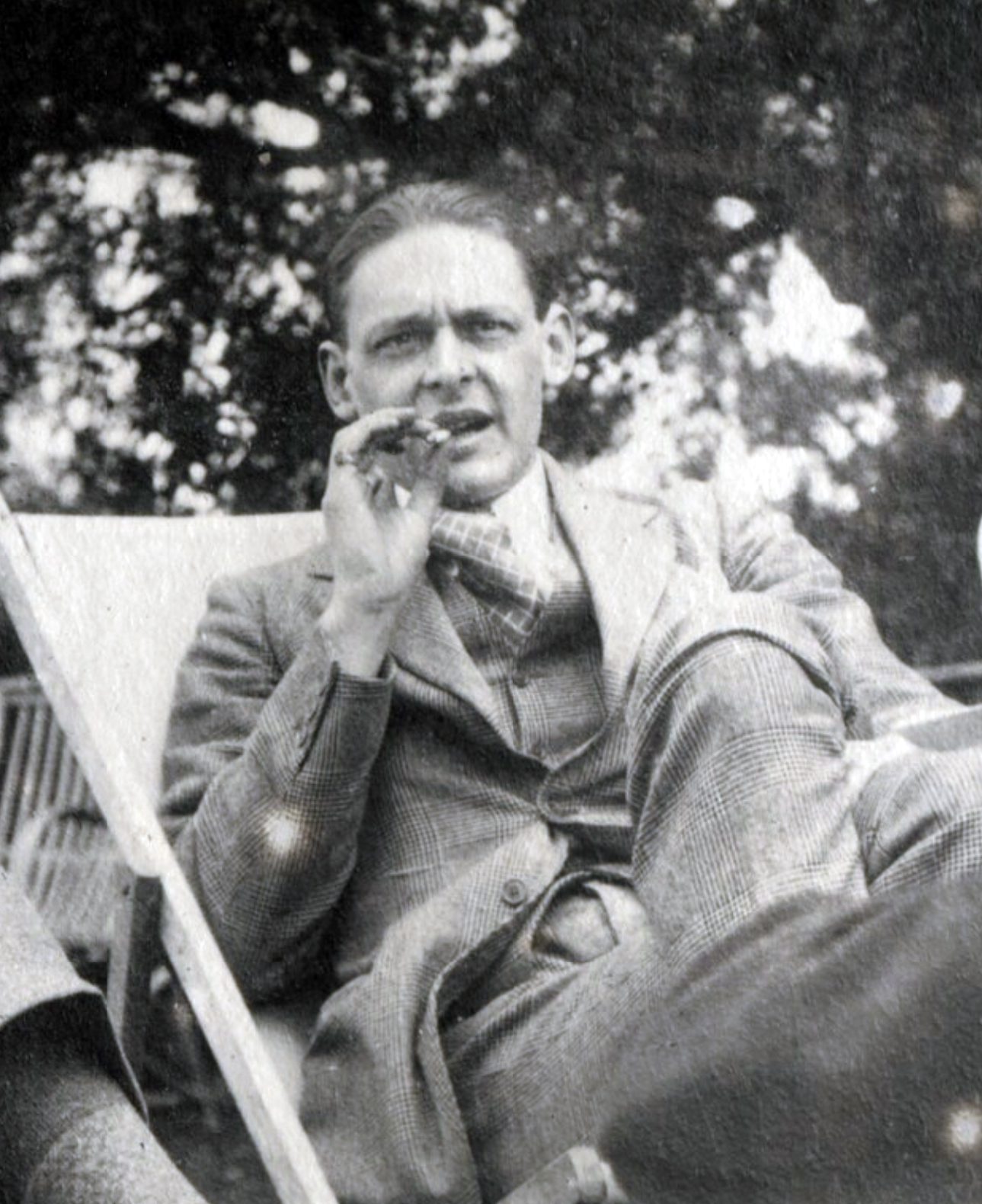 Thomas Stearns Eliot, OM (26 September 1888 – 4 January 1965), a major poet was also an essayist, publisher, playwright, and literary and social critic.[2] Born in St. Louis, Missouri, in the United States, to a prominent Boston Brahmin family, he moved to England in 1914 at the age of 25.

Eliot attracted widespread attention for his poem "The Love Song of J. Alfred Prufrock" (1915), which was seen as a masterpiece of the Modernist movement. It was followed by some of the best-known poems in the English language, including The Waste Land (1922), "The Hollow Men" (1925), "Ash Wednesday" (1930), and Four Quartets (1943).He was also known for his seven plays, particularly Murder in the Cathedral (1935) and The Cocktail Party (1949). He was awarded the Nobel Prize in Literature in 1948, "for his outstanding, pioneer contribution to present-day poetry".
Early life and education
The Eliots were a Boston Brahmin family with roots in Old and New England. Thomas Eliot's paternal grandfather, William Greenleaf Eliot, had moved to St. Louis, Missouri, to establish a Unitarian Christian church there. His father, Henry Ware Eliot (1843–1919), was a successful businessman, president and treasurer of the Hydraulic-Press Brick Company in St Louis. His mother, Charlotte Champe Stearns (1843–1929), wrote poetry and was a social worker, a new profession in the early 20th century.

Eliot was the last of six surviving children; his parents were both 44 years old when he was born. Eliot was born at 2635 Locust Street, a property owned by his grandfather, William Greenleaf Eliot. His four sisters were between 11 and 19 years older; his brother was eight years older. Known to family and friends as Tom, he was the namesake of his maternal grandfather, Thomas Stearns.

Eliot's childhood infatuation with literature can be ascribed to several factors. First, he had to overcome physical limitations as a child. Struggling from a congenital double inguinal hernia, he could not participate in many physical activities and thus was prevented from socializing with his peers. As he was often isolated, his love for literature developed. Once he learned to read, the young boy immediately became obsessed with books and was absorbed in tales depicting savages, the Wild West, or Mark Twain's thrill-seeking Tom Sawyer. In his memoir of Eliot, his friend Robert Sencourt comments that the young Eliot "would often curl up in the window-seat behind an enormous book, setting the drug of dreams against the pain of living." Secondly, Eliot credited his hometown with fuelling his literary vision: "It is self-evident that St. Louis affected me more deeply than any other environment has ever done. I feel that there is something in having passed one's childhood beside the big river, which is incommunicable to those people who have not. I consider myself fortunate to have been born here, rather than in Boston, or New York, or London."

From 1898 to 1905, Eliot attended Smith Academy, where his studies included Latin, Ancient Greek, French, and German. He began to write poetry when he was fourteen under the influence of Edward Fitzgerald's Rubaiyat of Omar Khayyam, a translation of the poetry of Omar Khayyam. He said the results were gloomy and despairing and he destroyed them. His first published poem, "A Fable For Feasters", was written as a school exercise and was published in the Smith Academy Record in February 1905. Also published there in April 1905 was his oldest surviving poem in manuscript, an untitled lyric, later revised and reprinted as "Song" in The Harvard Advocate, Harvard University's student magazine. He also published three short stories in 1905, "Birds of Prey", "A Tale of a Whale" and "The Man Who Was King". The last mentioned story significantly reflects his exploration of the Igorot Village while visiting the 1904 World's Fair of St. Louis. Such a link with primitive people importantly antedates his anthropological studies at Harvard.

Eliot lived in St. Louis, Missouri for the first sixteen years of his life at the house on Locust St. where he was born. After going away to school in 1905, he only returned to St. Louis for vacations and visits. Despite moving away from the city, Eliot wrote to a friend that the "Missouri and the Mississippi have made a deeper impression on me than any other part of the world."

Following graduation, Eliot attended Milton Academy in Massachusetts for a preparatory year, where he met Scofield Thayer who later published The Waste Land. He studied philosophy at Harvard College from 1906 to 1909, earning his bachelor's degree after three years, instead of the usual four. While a student, Eliot was placed on academic probation and graduated with a pass degree (i.e. no honours). He recovered and persisted, attaining a B.A. in an elective program best described as comparative literature in three years, and an M.A. in English literature in the fourth. Frank Kermode writes that the most important moment of Eliot's undergraduate career was in 1908 when he discovered Arthur Symons's The Symbolist Movement in Literature. This introduced him to Jules Laforgue, Arthur Rimbaud, and Paul Verlaine. Without Verlaine, Eliot wrote, he might never have heard of Tristan Corbière and his book Les amours jaunes, a work that affected the course of Eliot's life. The Harvard Advocate published some of his poems and he became lifelong friends with Conrad Aiken, the American writer and critic.

After working as a philosophy assistant at Harvard from 1909 to 1910, Eliot moved to Paris where, from 1910 to 1911, he studied philosophy at the Sorbonne. He attended lectures by Henri Bergson and read poetry with Henri Alban-Fournier. From 1911 to 1914, he was back at Harvard studying Indian philosophy and Sanskrit. Eliot was awarded a scholarship to Merton College, Oxford, in 1914. He first visited Marburg, Germany, where he planned to take a summer programme, but when the First World War broke out he went to Oxford instead. At the time so many American students attended Merton that the Junior Common Room proposed a motion "that this society abhors the Americanization of Oxford". It was defeated by two votes, after Eliot reminded the students how much they owed American culture.

Eliot wrote to Conrad Aiken on New Year's Eve 1914: "I hate university towns and university people, who are the same everywhere, with pregnant wives, sprawling children, many books and hideous pictures on the walls ... Oxford is very pretty, but I don't like to be dead." Escaping Oxford, Eliot spent much of his time in London. This city had a monumental and life-altering effect on Eliot for several reasons, the most significant of which was his introduction to the influential American literary figure Ezra Pound. A connection through Aiken resulted in an arranged meeting and on 22 September 1914, Eliot paid a visit to Pound's flat. Pound instantly deemed Eliot "worth watching" and was crucial to Eliot's beginning career as a poet, as he is credited with promoting Eliot through social events and literary gatherings. Thus, according to biographer John Worthen, during his time in England Eliot "was seeing as little of Oxford as possible". He was instead spending long periods of time in London, in the company of Ezra Pound and "some of the modern artists whom the war has so far spared... It was Pound who helped most, introducing him everywhere." In the end, Eliot did not settle at Merton and left after a year. In 1915 he taught English at Birkbeck, University of London. By 1916, he had completed a doctoral dissertation for Harvard on "Knowledge and Experience in the Philosophy of F. H. Bradley", but he failed to return for the viva voce exam.
Eliot died of emphysema at his home in Kensington in London, on 4 January 1965,[48] and was cremated at Golders Green Crematorium. In accordance with his wishes, his ashes were taken to St Michael and All Angels' Church, East Coker, the village in Somerset from which his Eliot ancestors had emigrated to America. A wall plaque in the church commemorates him with a quotation from his poem East Coker: "In my beginning is my end. In my end is my beginning."
In 1967, on the second anniversary of his death, Eliot was commemorated by the placement of a large stone in the floor of Poets' Corner in London's Westminster Abbey. The stone, cut by designer Reynolds Stone, is inscribed with his life dates, his Order of Merit, and a quotation from his poem Little Gidding, "the communication / of the dead is tongued with fire beyond / the language of the living." The apartment block where he died, No. 3 Kensington Court Gardens, has had a blue plaque on it since 1986.